Suppose I have a shapefile (lakes.shp) which consists of 5 polygons (Figure 1a).

The shapefile is stored as a SpatialPolygonsDataFrame. The data underlying these polygons can be viewed with:

There is a column called SHAPE_Area, which is the area of each polygon. Now let’s say, we want to create a buffer zone around the lake (Figure 1b).

Great! We can still see the underlying data with

However, the SHAPE_Area shown are the original lake areas. To find the true polygon area, we must dig into the polygon layer: buffer_ring@polygons. But each polygon is an element of a list, and the slot with “area” is deeply nested. Instead of looping through each polygon, here’s an easy way to extract polygon areas:

For the area of only the buffer: 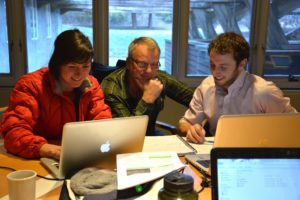